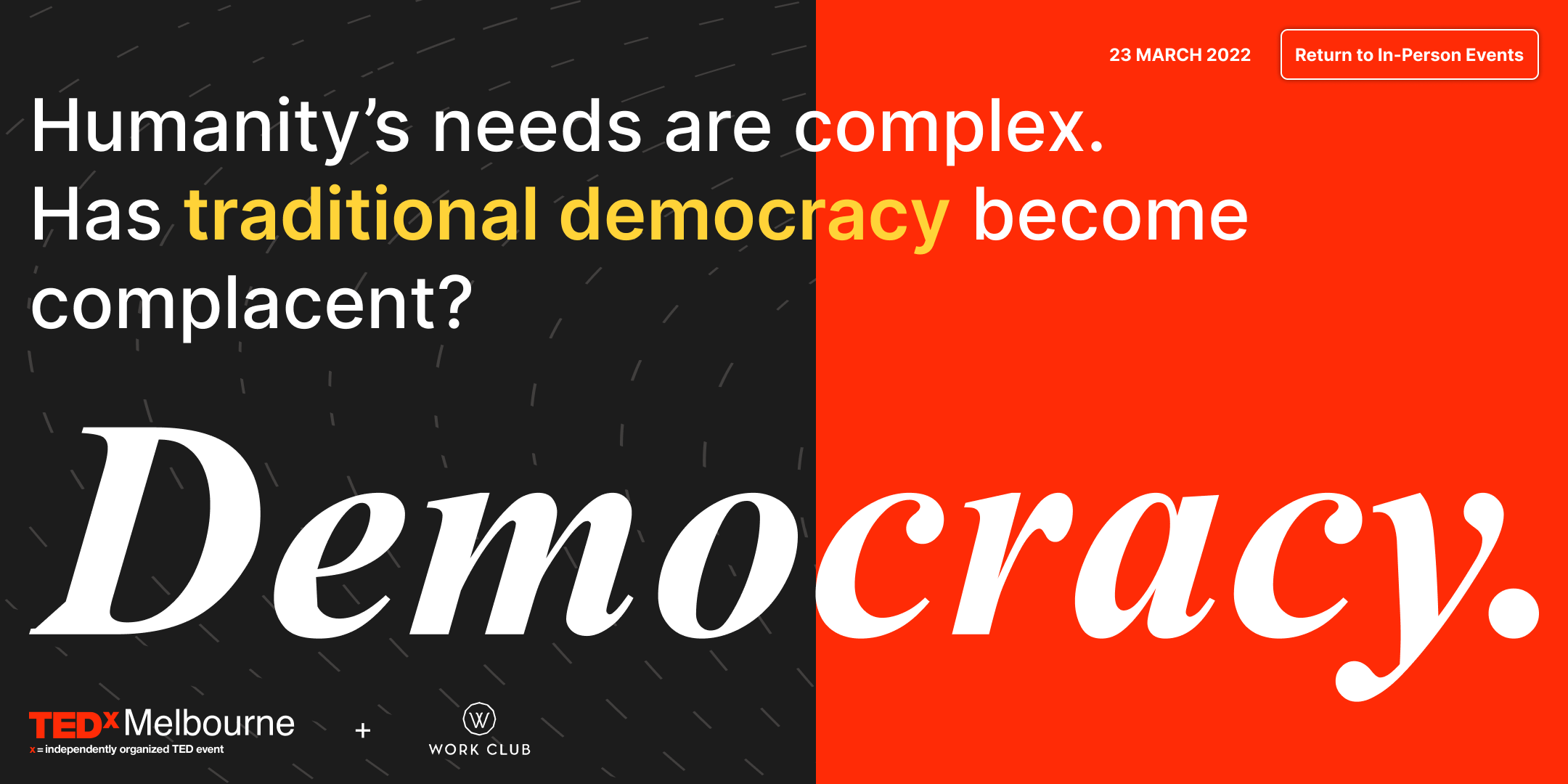 Recently we've seen democracy take some wild and extraordinary turns.
With left and right politics looking more similar than different, it has allowed extreme politics and the vocal minority to hold the interest of the community. Whether we like it or not, it has forced us to think about democracy and wonder if it works in most countries.

Has traditional democracy become complacent? Are the needs of the people now too complex for democracy to truly understand the community's needs and respond quickly?

We will ask the question - What IS democracy today and does it actually meet our needs?

With so much news and opinion coming from social media and a few media networks, who has the responsibility in curating these extreme views and yet still allow the vigorous conversations required of a modern democracy?

TEDxMelbourne will explore this topic with three informed guests – who may or may not agree with the current state of play with politics, freedom and democracy in Australia right now. Don’t miss this conversation, thanks to our partners at Work Club.

Yasmin Poole
Yasmin Poole is an award-winning speaker, board director and youth advocate and as Plan International’s National Ambassador she champions the importance of young women being heard in Australia’s political conversations. Yasmin also is the Non-Executive Board Director of OzHarvest, Australia’s leading food rescue charity and YWCA, a national feminist organisation that has supported women and girls for 140 years.

Yasmin’s other advocacy work includes being the former Chair of the Victorian Government’s Youth Congress. In 2019, Yasmin was the youngest member of the Australian Financial Review 100 Women of Influence and Top 40 Under 40 Most Influential Asian Australians. In 2021 she was named The Martin Luther KingJr Center’s Youth Influencer of the Year and became the youngest ever inductee into the Victorian Honour Roll of Women.

Kyle Redman
Kyle Redman is the Research and Design Project Manager at the newDemocracy Foundation and the Campaign Strategist at Change Politics. He joined newDemocracy in 2016 after completing a Bachelor of Arts at UNSW, majoring in Philosophy and Politics, and achieving First Class Honours writing on Populism and Political Representation in Australia.

He has designed and managed several of newDemocracy's major projects, working with the ACT Government, Local Government Victoria, Western Sydney University, Byron Shire Council and City of Sydney. He has also worked with international partners to design democratic innovations in Belgium, Brazil and Spain ad has co-authored the UN Democracy Fund handbook “Democracy Beyond Elections”, and “The A, B & C of Democracy”.

Andrea Carson
Andrea Carson is a political scientist and an Associate Professor in Journalism in the Department of Politics, Media and Philosophy at La Trobe University. Her scholarship focuses on political communication, election campaigns and digital media, and fake news. Her most recent book examines the future of evidence-based reporting: Investigative journalism, democracy and the digital age. She also investigates low quality information and has written extensively about fake news, working with Facebook and Google to address this global problem. She holds a PhD in Political Science and a Master of Arts in International Politics.

Andrea has taught courses on journalism, political communication, women in politics, and campaigns and elections. She worked as a newspaper journalist and section editor at The Age from 1997-2001 and as a radio broadcaster (RRR) and radio and television producer (Australian Broadcasting Corporation) from 2001-2010. She is a regular media commentator and contributes articles to The Conversation.

Don't forget to share your experience online by using the hashtag #TEDxMelbourne on your preferred social network, and tagging us!

Places are limited so register today!

TEDxMelbourne strives to provide access and inclusion for all people. We aim to create events and experiences that are safe and accessible for all. If you have any questions or special requests regarding accessibility at one of our events, please feel free to contact us before your visit at hello@tedxmelbourne.com. We will do our very best to help!

Access is via 477 Collins St, use the stairs or lift to the lower floor. On the lower floor, there is a fully functioning bar and bathrooms. Feel free to request assistance from the lobby concierge.